Mr Trump headed to his Mar-a-Lago resort in Florida as he boycotted Joe Biden’s inauguration ceremony. 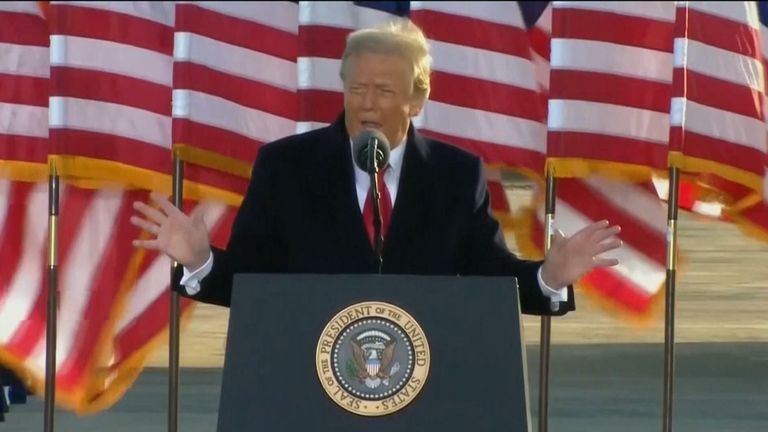 Donald Trump has vowed “we will be back in some form” after leaving the White House following four years as US president.

Mr Trump boycotted Joe Biden’s inauguration ceremony in Washington DC and instead flew to Florida to stay at his Mar-a-Lago resort.

Before boarding Air Force One, Mr Trump told supporters it had been “an incredible” four years and thanked his family watching on, with some of his children appearing emotional.

“As the athletes would say, we left it all on the field,” he said.

“It has been my greatest honour and privilege to have been your president.”

Mr Trump, who has refused to publicly concede to Mr Biden, wished the new administration “great luck and great success” – but said: “We will be back in some form.” 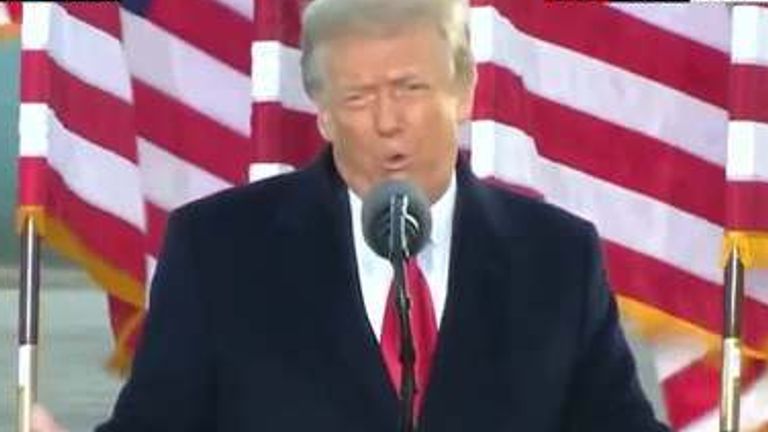 Earlier, as he walked out of the White House, Mr Trump said: “I just want to say goodbye but hopefully it’s not a long-term goodbye. We’ll see each other again.”

Mr Trump is the first president to skip his successor’s inauguration since Andrew Johnson in 1869, and only the fourth to have done so in history.

However he did follow one presidential tradition, with the White House confirming Mr Trump left a note for Mr Biden – although no further details about the message have been revealed.

Television coverage of the ceremony was playing on the plane during Mr Trump’s flight, the Associated Press reported.

Mr Trump’s family was also on board and the outgoing president spent some of the flight meeting staff who went up to say goodbye.

As he left the White House earlier, Mr Trump held hands with First Lady Melania Trump as they walked across the lawn before waving as he boarded the Marine One helicopter.

The helicopter took him to Joint Base Andrews where Air Force One was waiting to fly him to Florida.

His send-off was complete with a red carpet up to the steps of the plane, a military band and a 21-gun salute.

Mrs Trump also spoke briefly at the event, saying: “Being your first lady was my greatest honour.”

Vice President Mike Pence skipped the event, citing the logistical challenges of getting from the air base to the inauguration ceremony.

In his final recorded address as president on Tuesday, Mr Trump said he will “pray for the success” of Mr Biden’s administration – but claimed the political movement he created “is only just beginning”.

He said: “As I prepare to hand power over to a new administration at noon on Wednesday, I want you to know that the movement we started is only just beginning. There’s never been anything like it.

“The belief that a nation must serve its citizens will not dwindle but instead only grow stronger by the day.” 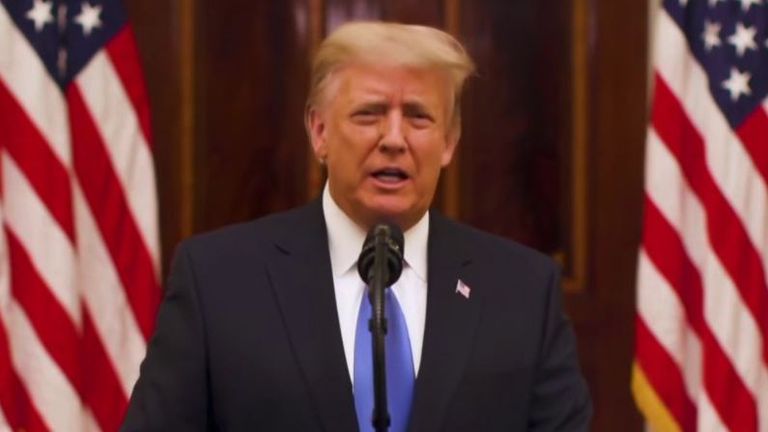 ‘We pray for the new administration‘

Bannon, who was fired by Mr Trump in August 2017, has pleaded not guilty to charges accusing him of swindling Trump supporters over an effort to raise private funds to build the US-Mexico border wall.

Wayne pleaded guilty last month to possessing a loaded, gold-plated handgun on a private flight in 2019 and is due to be sentenced next week.

Mr Biden’s inauguration ceremony will take place in front of a heavily fortified US Capitol, where a mob of Trump supporters stormed the building two weeks ago.

Trump’s defenders who went to Washington

The violence, which left five people dead, prompted the Democratic-controlled US House of Representatives to impeach Mr Trump last week for an unprecedented second time.

He was charged with incitement of insurrection after he was accused of firing up the rioters with false claims that
November’s presidential election was stolen with millions of fraudulent votes.

Instead of supporters gathering to see Mr Biden sworn in, the National Mall will be covered by nearly 200,000 flags and 56 pillars of light meant to represent people from US states and territories.