Data suggest that about 3% of Americans, or nearly 10 million people, have been infected with coronavirus. Unfortunately, this data comes from late April and early May, and the virus has spread even further since then. The official COVID-19 case tally, therefore, is a dramatic undercount. 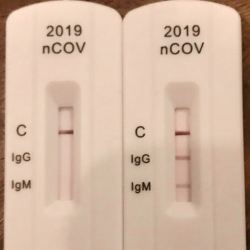 How many Americans have been infected by SARS-CoV-2, the novel coronavirus?

It’s an incredibly tricky question to answer. We cannot simply rely on the number of people who have a positive test result. People who get tested usually do so for a reason; namely, they feel sick or believe they have been exposed. This misses two key groups of people: (1) Sick people who didn’t get tested (perhaps because tests weren’t yet available, or they didn’t feel like going to the hospital); and (2) Infected people who are asymptomatic, who are unlikely to get tested. As a result, coronavirus case tallies are an undercount. The question is by how much.

The only way to answer this is to do a random survey, similar to the way pollsters (fairly accurately) determine the percentage of Americans who plan to vote for a particular presidential candidate. Instead of giving an opinion, however, volunteers give fluid samples.

Two different studies reported by the CDC used this technique to determine the prevalence of COVID-19. The first study, conducted statewide in Indiana, used nasal swabs and nucleic acid detection (RT-PCR) to determine the prevalence of current infections, which the authors determined to be 1.7%. (They also found that 44% of these were asymptomatic.) The researchers also collected blood samples for antibody tests to determine prior infection, which was determined to be 1.1%. Overall, the team concluded that 2.8% of Indianans were currently or previously infected with coronavirus.

In the second study, researchers only used antibody testing in two counties in the Atlanta area to determine prior infection. They found that 2.5% of those analyzed had tested positive.

What Do These Studies Mean?

Assuming that these figures can be extrapolated nationwide, a prevalence of roughly 3% means that nearly 10 million Americans would have been infected by coronavirus at the time the surveys were conducted. Unfortunately, those surveys were performed in late April and early May, and the virus has spread even further since then. The bottom line is that the current tally of just under 5 million cases is a dramatic undercount.

These findings also highlight the importance of wearing a mask while in indoor public spaces. If nearly half of those infected have no symptoms, then we all must wear a mask to protect those around us lest we are infected and don’t know it. (Remember, masks protect society from you, not you from society.) It’s a slight inconvenience, but it’s the right thing to do.