“Twelve Diseases That Changed Our World” was originally published in 2007 but has taken on renewed relevance during the COVID-19 pandemic. Will the coronavirus similarly change our world? We review the book authored by Prof. Irwin Sherman. 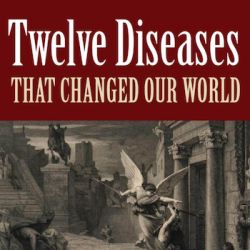 Twelve Diseases that Changed Our World by Irwin Sherman

This book review was originally published at Geopolitical Futures. The original is here.

Modern society is far removed from the reality of death. That was not the case for the vast majority of human history, when parents would produce multiple offspring in the hope that a few might survive to adulthood. Well into the 20th century, infectious diseases cut lives tragically short, often in gruesome ways, radically transforming the course of human history in ways that are underappreciated in textbooks.

This is the focus of a book written by emeritus biology professor Irwin Sherman called Twelve Diseases That Changed Our World, which was originally published in 2007 but has taken on renewed relevance during the COVID-19 pandemic. Sherman masterfully interweaves explanations of the biology and epidemiology of the diseases with accounts, taken from historians or eyewitnesses, that are nauseatingly descriptive.

For instance, a passage describes yellow fever, a viral infection transmitted by mosquitoes, thus: “Slowly, the patient’s skin turned yellow and patches of the inside of his mouth began to ooze blood.” A pan was kept by the bedside to “catch the black vomit, a mixture of blood and digestive juices.” Fevers could spike as high as 105 degrees Fahrenheit.

This horrifying disease greatly influenced the geopolitics of the Western Hemisphere on at least two occasions. On the first, it scuttled Napoleon Bonaparte’s plan for a North American empire after the virus felled perhaps 50,000 French troops in Haiti who were deployed to put down a slave rebellion. Because an invasion of the continent was contingent on an established presence in Haiti, Napoleon gave up and sold Louisiana to the United States. On the second occasion, France again was victimized by the virus. Unable to complete the Panama Canal after about 22,000 workers died, mainly from yellow fever, the French sold everything to the United States. Colombia opposed the deal, but the Panamanians did not, so the U.S. and France encouraged the Panamanians to revolt. Panama declared independence, and the U.S. signed a treaty with Panama instead of Colombia.

Other infectious diseases that have left an indelible mark on history include cholera, which led to the development of national public health systems and to organizations like the International Committee of the Red Cross, and malaria, which protected Rome from foreign invaders and played a role in major wars throughout world history. Many infectious diseases were blamed on foreigners. The French and Italians blamed each other for syphilis, the Russians blamed the Poles, the Japanese blamed the Chinese, and the English blamed the Spanish. Americans blamed Jews for tuberculosis.

Of the 12 diseases Sherman discusses, two are genetic: hemophilia and porphyria. Both affect the blood, and both caused problems for monarchies across Europe. Porphyria, for example, may have been responsible for the “madness” of King George III. Though it probably didn’t cause him to lose the American colonies, it likely played a role in the (Protestant) king’s oppression of Irish Catholics, and a mutual animosity exists between them to this day.

Intriguingly, toward the end of the book, Sherman predicts a major pandemic and describes the fallout:

“[I]t will seriously impact our lives: hospital facilities will be overwhelmed because medical personnel will also become sick … reserves of vaccines and drugs will soon be depleted, leaving most people vulnerable to infection. There will be social and economic disruptions.”

Prophetic, yes. But he was speaking of influenza, not of COVID-19. Correct prognosis, wrong virus.